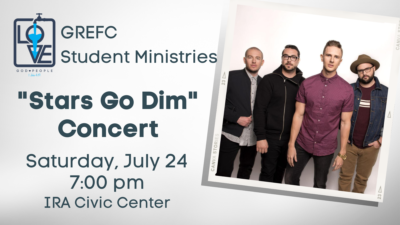 Stars Go Dim will be in town for a concert at the IRA Civic Center and the students are going!

Formed in 2007 as a mainstream pop band, today Stars Go Dim is the moniker for Christian pop artist and songwriter Chris Cleveland. Cleveland found success in the Christian format with his self-titled debut album. The singer has garnered three Top 5 hits and a massive No. 1 radio smash with “You Are Loved.” In addition, Stars Go Dim has toured with for KING & COUNTRY, Lauren Daigle and Phil Wickham, among others, and has been featured on the Winter Jam Tour Spectacular.

Tickets are $20 each and can be purchased at Inspirations book store in Grand Rapids, or online HERE.

You never really “arrive” at becoming a mature disciple maker. We are all called to continually grow deeper in our relationship with Jesus, to grow in love for others, to get better at blessing those around us and to increasingly share the love of Jesus with everyone. At GREFC we realize this through four key areas: Connect, Equip, Serve & Go!