One of the main concerns we heard from some during the campaign was the loss of the large space that is our current worship center. Many thought we should keep as much of that space for fellowship/coffee as possible. Yet, we also knew we needed more space for children and students.

As we got into the design details it made sense to address those concern. We evaluated the suggestion that relatively inexpensive space could be constructed to the north of the existing stage by simply building three walls and extending the roof line.

We also discovered that by extending the length of the storage/sprinkler room addition off of the new auditorium from 32’ to 56’ we could gain some more affordable storage space.

Both of these opportunities will only be possible if done as part of the project because of economies of scale and the fact that they would require a lot of remodeling in the future.  Because of this we’ve decided to design those elements into our plans and assess affordability as we get the costs firmed up.

Here are two pictures which illustrate the two areas we are talking about. In this first picture we show the future coffee/fellowship area.  Note the green lines to give you a sense of where things are. 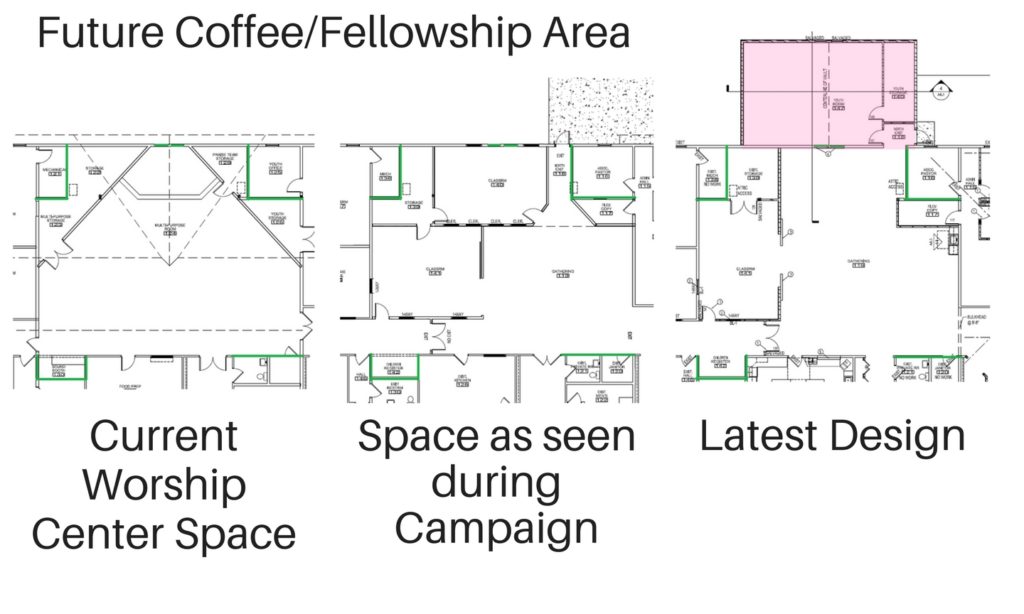 And below is the proposed storage area.  Note the blue lines that show the outside edge of the current Student Ministries room to give you a sense of where things are. 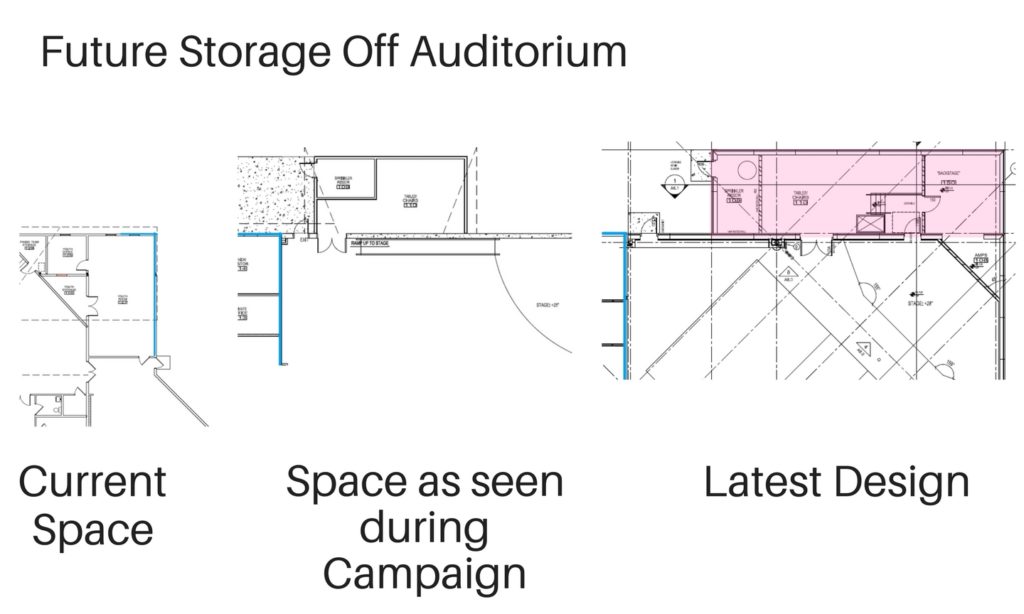 We decided to move forward with this latest design and are using it to solicit bids from contractors.

Where We Are Now
We’ve received preliminary pricing on the precast concrete wall panels and sprinkler system which came in favorably. These are two big line items in our budget that are looking better than we had anticipated which is great for the overall budget.

We’ve also learned that lead time for delivery of precast concrete panels (which are what the auditorium will be built from) shows no problems in meeting our schedule.  We still have a long way to go but so far we can be thankful for the progress and results we’ve gotten.

Our engineers are working on their designs for the structural, mechanical and electrical systems which we are integrating into the design of the rest of the building.  We have had the
mechanical, electrical & plumbing engineers/designers and sprinkler contractors walk through the existing building to firm up their design.

We hope to be able to solicit final bids for precast concrete and structural steel around February 20th and then the rest of the project items in early March.

We are on track and in good shape for construction to begin this spring!  God is Good!

Summer Office Hours
The church office is closed for the summer. Church staff are available by appointment only. Please see the Leadership and Staff page of this website for contact information.